Hornbills generally form monogamous pairs. The female lays up to six white eggs in existing holes or crevices, either in trees or rocks. The cavities are usually natural, but some species may nest in the abandoned nests of other birds. Before incubation, the females of all hornbills assisted by the male—begin to close the entrance to the nest cavity with a wall made of mud. When the female is ready to lay her eggs, the entrance is just large enough for her to enter the nest, and after she has done so, the remaining opening is also all but sealed shut. There is only one narrow aperture, big enough for the male to transfer food to the mother and eventually the chicks.  During the incubation period the female undergoes a complete moult, using the feathers to line the nest. During this period the male will continually feed the female through the small opening. When the chicks and the female are too big to fit in the nest, the mother breaks out, then both parents feed the chicks. 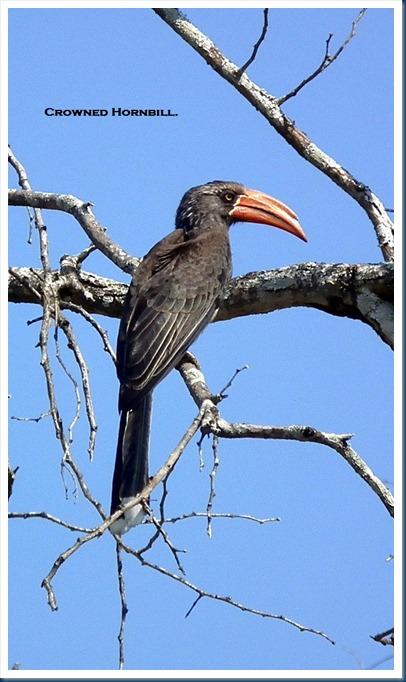 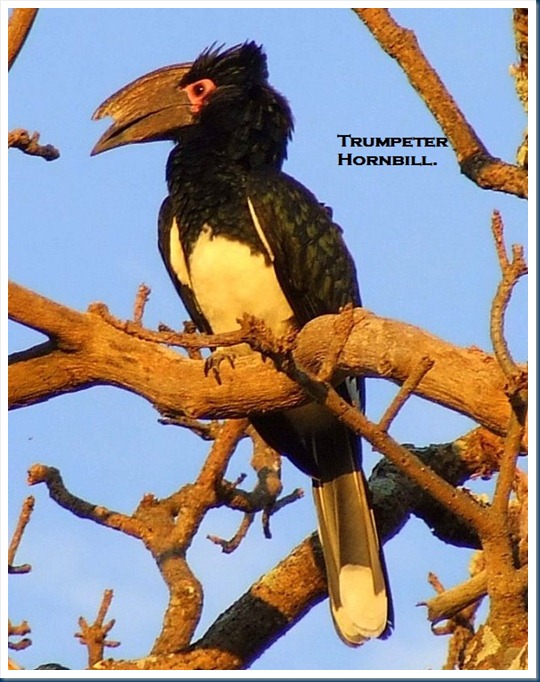 The Trumpeter Hornbill, (Seen above right) is a medium-sized hornbill, with length between 58 and 65 cm (23 and 26 in), characterized by a large grey casque on the bill, smaller in females. The eyes are brown or red, with pink surrounding skin. Body mass is reported between 0.45 and 1 kg (0.99 and 2.2 lb.).. Distinguishing features include an all-black back, white belly and white under wing coverts (in flight, wings present white tips), and red facial skin.

The Trumpeter Hornbill is a gregarious bird, usually living in groups of 2 to 5 individuals, although sometimes as many as 50. This hornbill is a locally common resident of the tropical evergreen forests of eastern South Africa, where it feeds on fruits and large insects. Like other hornbills, the females incubate 4 to 5 white eggs, while sealed in the nest compartment.

It is a large bird, at 90 to 129 cm (36 to 51 in) long. Females weigh 2.2 to 4.6 kg (4.8 to 10.1 lbs.), while the larger males weigh 3.5 to 6.2 kg (7.6 to 13.6 lbs.). It is characterized by black coloration and vivid red patches of bare skin on the face and throat (yellow in juvenile birds, right hand photo). The white tips of the wings seen in flight are another diagnostic characteristic. The beak is black and straight and presents a casque, more developed in males. Female Southern Ground Hornbills are smaller and have violet-blue skin on their throats.

Its habitat comprises savannahs, woodlands and grasslands. It can be found in northern South Africa. The Southern Ground Hornbill is a vulnerable species, mainly confined to national reserves and national parks. They live in groups of 5 to 10 individuals including adults and juveniles. They forage on the ground, where they feed on snakes, frogs, snails, insects and small mammals. Juveniles are dependent on adults for 6 to 12 months.