I thought Wikipedia did a very good job of this entry so courtesy of them I reproduce their entry….. BUT the photos are mine taken at Oribi Gorge, South Coast Natal, South Africa… and I add a photo of me on my favourite perch….

The Pin-tailed Whydah (Vidua macroura) is a small songbird. It is a resident breeding bird in most of Africa south of the Sahara Desert.

This whydah is found in many open habitats including open woodland, scrub and cultivation.

It is a brood parasite which lays its eggs in the nests of estrildid finches, especially waxbills. Unlike the Common Cuckoo, it does not destroy the host’s eggs. Typically, 2-4 eggs are added to those already present. The eggs of both the host and the fire finch are white, although the whydah’s are slightly larger. The nestling whydahs mimic the gape pattern of the fledglings of the host species.

The Pin-tailed Whydah is 12–13 cm in length, although the breeding male’s tail adds another 20 cm to this. The adult male has a black back and crown, and a very long black tail. The wings are dark brown with white patches, and the under parts and the head, apart from the crown, are white. The bill is bright red.

The female and non-breeding male have streaked brown upper parts, whitish underpants with buff flanks, and a buff and black face pattern. They lack the long tail extension, but retain the red bill. Immature birds are like the female but plainer and with a greyish bill.

The male Pin-tailed Whydah is territorial, and one male often has several females in his small group. He has an elaborate courtship flight display, which includes hovering over the female to display his tail. The song is given from a high perch, and consists of rapid squeaking and chirring. The diet of this species consists of seeds and grain. 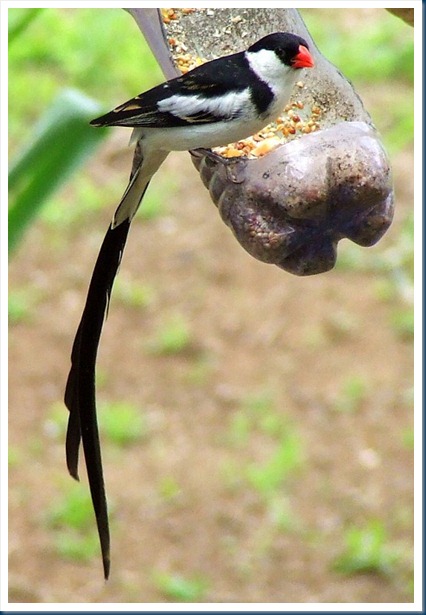 And now for the Photos of the poor unassuming female bird… but she’s not henpecked she doesn’t raise her own young.. 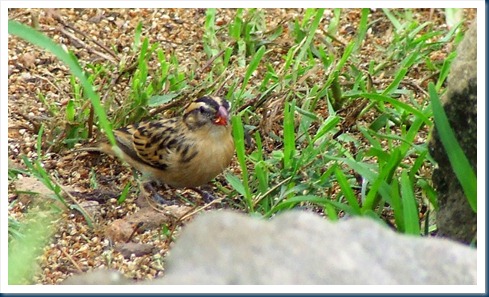 And two other bird taking a bath, difficult to identify… so lets call them “Birdies..” 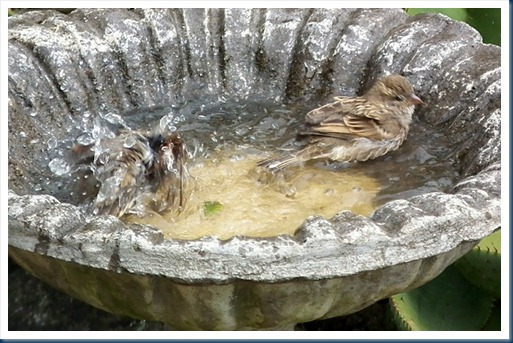