I’m not going to get all political, but I am going to be serious.

A disaster that happen 34 years ago, almost to the day, and follow by another, 5 months later, was commemorated with the unveiling of the memorial to those that lost their lives. Sunday past, the 2nd September 2012, saw this memorial unveiled in the gardens of the South African Voortrekker Monument. Civilians, shot down in cold blood, who were flying on civilian aircraft from Lake Kariba where they’d been on holiday. Terrorists using Sam 7 missiles targeted two Air Rhodesia Viscounts, and shot them out of the skies. The one had survivors, some remained by the downed plane, while others went to seek aid. Those that stayed behind were bayoneted and shot by the terrorist group that had fired the missile. Unarmed civilians killed in cold blood. This has been referred to as Rhodesia’s 9/11. The main plaque on the memorial has this statement on it… 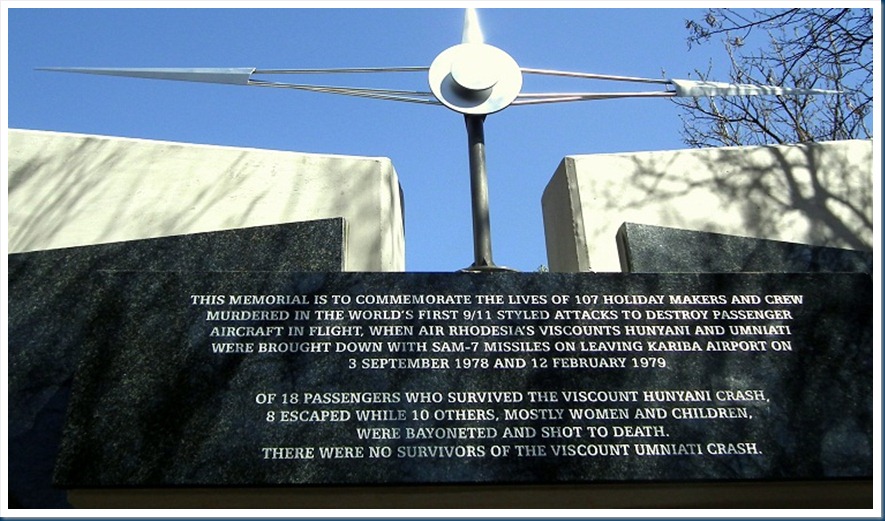 I lost friends on both planes and it was a shock when it happened… They say all is fair in love and war, but that has no meaning to me when it comes to innocent civilians, women and children. These terrorists where tracked and captured, every single one of them that were involved  in the disasters..

The worst of it was that not one other country, except for South Africa, condemned the atrocity. No Church leaders, not the Pope, the Archbishop of Canterbury, the Chief Rabbi, not a sole. Governments, none, we were alone in a battle against this type of terrorism, but being at the memorial, witnessing those that were there, such pride still felt by all 450 there. Seeing old soldiers wearing their medals, berets and jackets adorned with their units badges proudly, I realised that the Rhodesians spirit will never die. If we were called to arms, to do it all over again, I’m sure we would.

The old Flag was lowered to half mast, the pipes played their tune and the ceremony began… 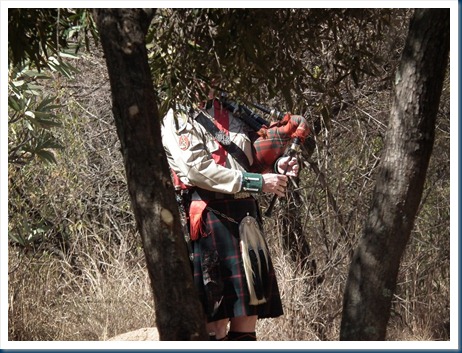 The prayers said, the hymns sung, the memorial unmasked, and the consecration done… to read the names and ages of all those killed in this atrocity, brought tears to many. Wreaths laid by family members and thoughts of lost loved ones, brought a deadly silence to the proceedings..

“We will remember them.”

A good friend of mine and a published poet… wrote a poem about the proceedings and with his permission I post it here… my love for poetry probably began when I started to read his poems.. his book is available from Amazon… and here is his special poem for the day, and for this I thank him…

Piper’s mournful lament drifts on heat and rising haze,
‘Amazing Grace’, ‘Abide with me’; unto God we gave the praise,
The ‘Green and White’ flew at half mast; host Angels bid it blow,
Their gentle breath on our dear flag, caused many tears to flow.

Two Granite stones bear the names of loved ones now passed on,
We have promised to remember them in the morn and setting sun,
Those who survived Hunyani; troubled families seeking rest,
Come to honour the dead; civilians, and Rhodesia’s fighting best.

It stands now to remind the world of the depths that men can sink,
Showing man’s inhumanity to man; and just how the evil think.
This memorial stands not only to recall Rhodesia’s hurt, or pain,
But to remind a once proud nation …we would do it all again.

By Alf Hutchison after the unveiling of the Viscount Hunyani and Umniati
Memorial in Pretoria on 2nd September 2012.

141 thoughts on “Rhodesia’s 9/11 Attack, a Memorial and Unveiling of the Monument.”