The bird is a medium-sized (75-95 g) cooperative breeder. Groups range in size from 2-16 adults, and pairs are rare. The species is sexually monomorphic. Each group comprises a dominant breeding pair that monopolise the breeding opportunities.

All group members cooperate to help raise the young hatched from a single clutch. Clutch size varies between 2 and 5, with an ideal clutch size of three. The breeding season extends from late-September to early April, although this varies between years and is strongly rain-dependent. Groups can raise up to three successful clutches per breeding season.

Aggression toward fledglings is most commonly observed when the dominant pair have begun to incubate another brood. During this period, begging fledglings will be punished by parents using aggressive behaviour such as jumping on the youngster. In all cases, fledglings stop begging immediately following the attack.

Pied babblers are territorial, and defend their area using wing and vocal displays on a near daily basis. These fights however rarely lead to physical aggression and injury. Groups defend the same territory year-round and small groups tend to lose portions of their territory to larger neighbouring groups.

Linda and I were privileged to witness, nearly daily, this territorial battle whilst in Kathu. The birds are very vocal and it looks as though they’re about to start a war… then the one side will back down and fly off… the winners get together and chat away noisily .. as though they’re discussing the others…. 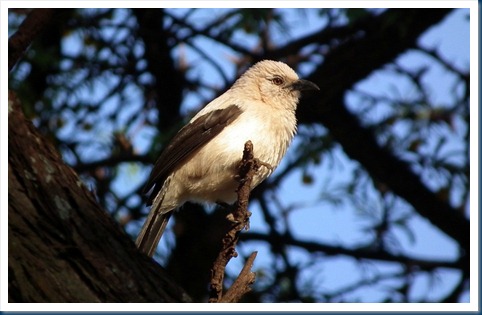 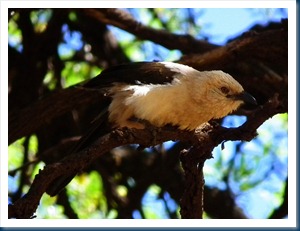 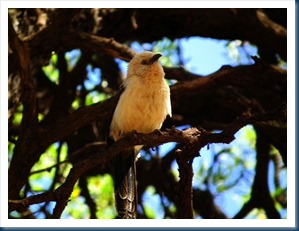 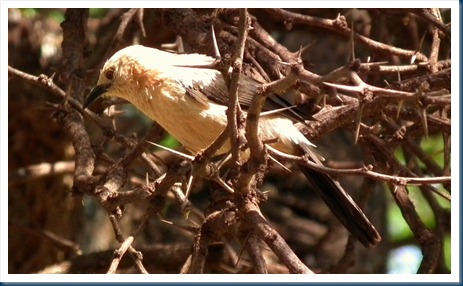 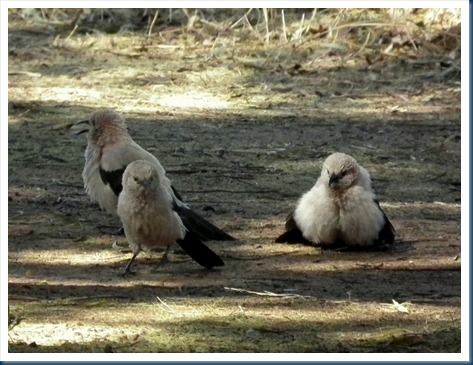 And that’s what they think of the other team……