A coucal is one of about 30 species of birds in the cuckoo family. All of them belong in the subfamily Centropodinae and the genus Centropus. Now that should give you a hint as to the Beast side of the bird…

This bird is so beautiful, shy and yet such a beast when it comes to it’s eating habits. It is well known for its haunting call, that once begun by one, is joined by all in the area    Click here to get a quick version of the call.

It has a chestnut-brown back and similar wing feathers and a long tail that flops along as though it has no control over it, with marked bands in its upper parts. with a flattish head that it often pulls back as though to hide itself.

Unlike many cuckoos, coucals are not brood parasites. On the other hand they do have their own reproductive peculiarity: all members of the genus are to varying degrees sex-role reversed so that the smaller male provides most of the parental care. Typical “henpecked male syndrome”.

The  Burchell’s Coucal eats any prey smaller than itself, and it’s not small, (40 cm long and approx. 180 grams) it has a particular liking for young nestlings and the eggs of other birds. It will seek out and eat off the nest whatever it can find, and for this reason I call it a beast… but then I suppose this is nature in the raw…..

The first two photos I played with, I wanted to get something which a friend of mine is going to try and paint… what do you think..?? 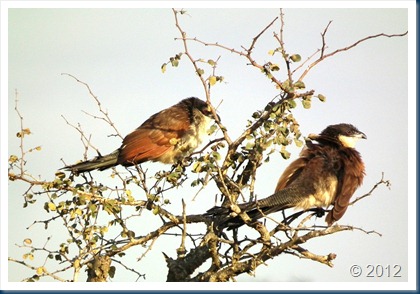 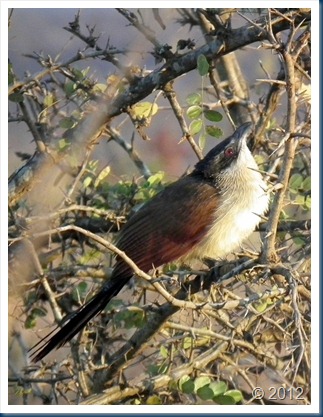 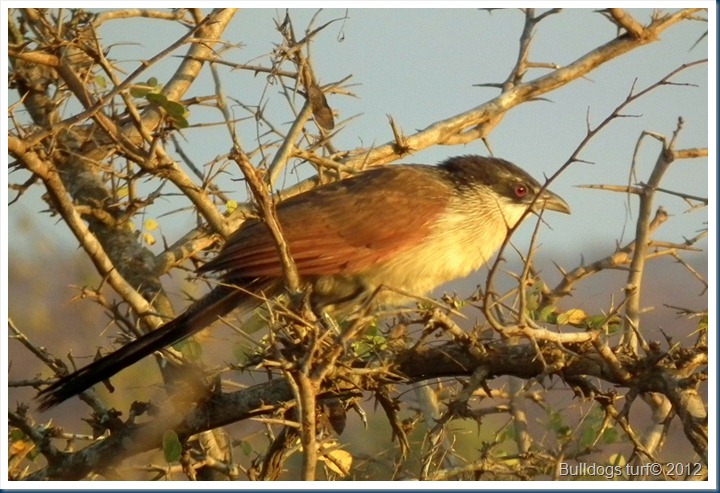