Now here we go again… two names, I have trouble remembering the one.

This bird is widespread and found in a wide range of habitats, including shrub land, savannah, grassland, open woodland, inland wetlands and semi-desert areas. It also occurs in suburban gardens and parks, in other words it’s found everywhere.

The Southern Masked Weaver nests in colonies. Males have several female partners, haven’t heard of monogamous relationships, and build a succession of nests. The nests, like those of other weavers, are woven from reed, palm or grass. The female will line a nest she likes with soft grass and feathers. The nest is mostly built in a tree over water.

The Southern Masked Weaver lays eggs of a various colour and this helps it to evade parasitisation by cuckoos because the cuckoo has no way of knowing what kind of eggs are inside the weaver’s nest until it has entered the nest to attempt to lay one itself. Eggs of the wrong colouration are ejected by the nest owners. Clever hey???

Now after yesterdays post of the White-browed Sparrow-Weaver and it’s not so neat nest, this bird is fanatical, and the female very picky about her selection… here’s some photos…

The Female checking out a possible home…. with the male already building in the background…. 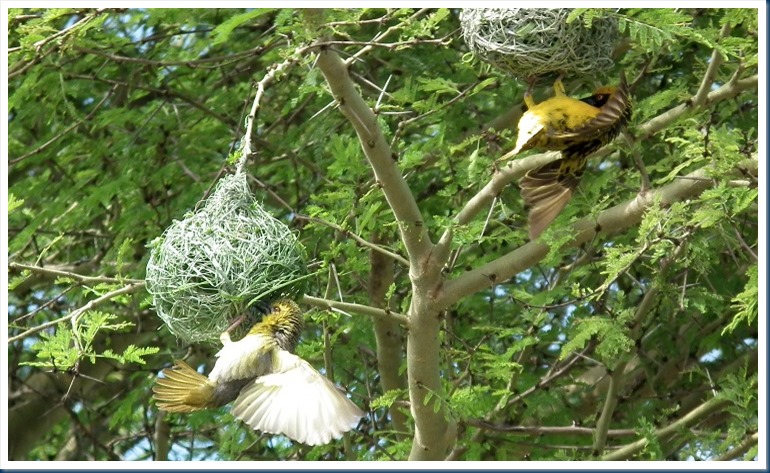 “Calling all ladies, house for rent, costs nothing except sleeping with the owner….”

“This one the ladies will love… looks good and sturdy…”

“Hey who supplied the food?”