I cannot tell you how long I’ve tried to get a photo of this bird, but at 5 inches, tail to beak tip, you got to be lucky to get close enough.

I got a photo once which was the best I’ve ever got before yesterday, and this wasn’t even in focus… a classic for the “Worst Bird Photography Ever.”

This is a species common to reeds and aquatic vegetation near slow moving water or ponds. The flight of the bird is rapid, the short rounded wings whirring until they appear a mere blur. It usually flies low over water.

The bird has a regular stand from which it fishes. These are usually low over the water. It sits upright, its tail pointed downwards. It drops suddenly with a splash and usually returns at once with a struggling captive. No wonder it’s called a “KING fisher”..

The nest is a tunnel in a sandy bank, usually over water. Both work together to excavate. the burrow inclines upward before the nesting chamber is reached. There is no nest, but 3-6 round white eggs are placed on a litter of fish bones and disgorged pellets.

The call of this kingfisher is a short shrill “seek.” The breeding song is a chuckling “li-cha-cha-chui-chui.” and in case you’re not sure, the Bulldog’s bark after this capture is “Yipeeeeeeeeeeeeeeeeeee” 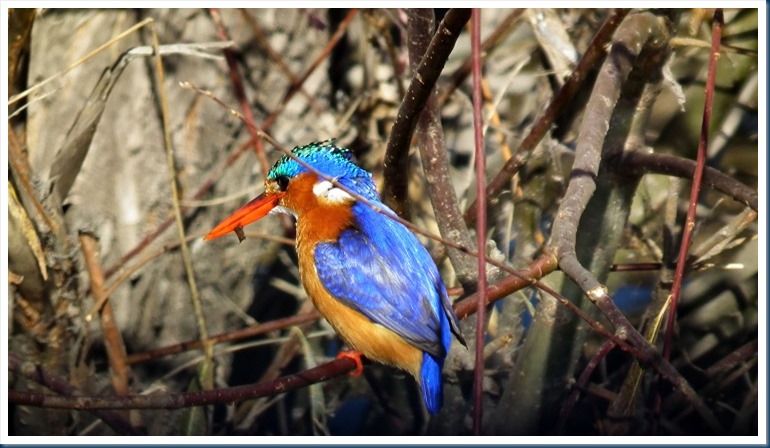