Imagine you have driven through the Kalahari Gemsbok Park, it’s hot and dry, the animals are lethargic from the heat.. and this is what the river bed looks like…..

BUT… some rain has fallen in some parts of the Park, you might not be able to see it under ground but the signs are there,.. Look at the green strip, that is water just below the surface…. 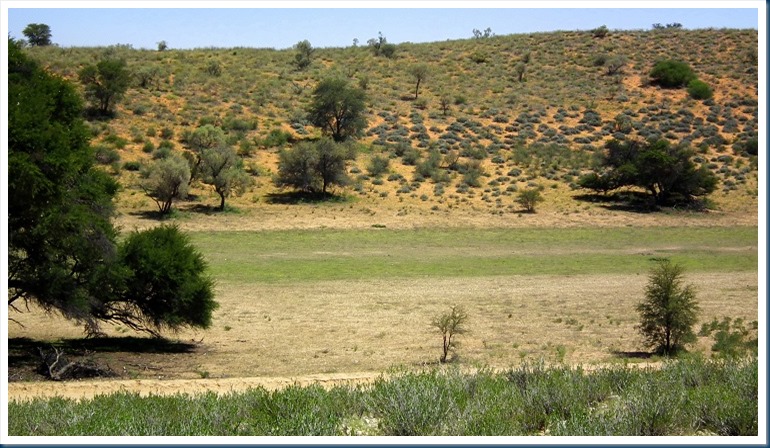 Now imagine driving through the Kalahari after a good rainfall has fallen, a cloud break and a good soaking … would you expect to see this????? A river of flowers with the Gemsbok enjoying the occasion….

This is what makes Africa so beautiful… veld flowers that can lie dormant in seed form for years, and when the circumstances are right… the world is covered in flowers, and that in some of the most barren portions of South Africa.. Oh it is a tough country to live in …. ha ha ha ha…

It is a large antelope in the Oryx genus. It is native to the arid regions of Southern Africa, such as the Kalahari Desert. The current gemsbok population in South Africa is estimated at 373,000.

Gemsbok are widely hunted for their spectacular horns that average 85 cm (33 in) in length. From a distance, the only outward difference between males and females is their horns, and many hunters mistake females for males each year. In males, these horns are perfectly straight, extending from the base of the skull to a slight outward and rearward angle. Females have longer, thinner horns with a slight outward and rearward curve in addition to their angle. But don’t always believe what you read….. 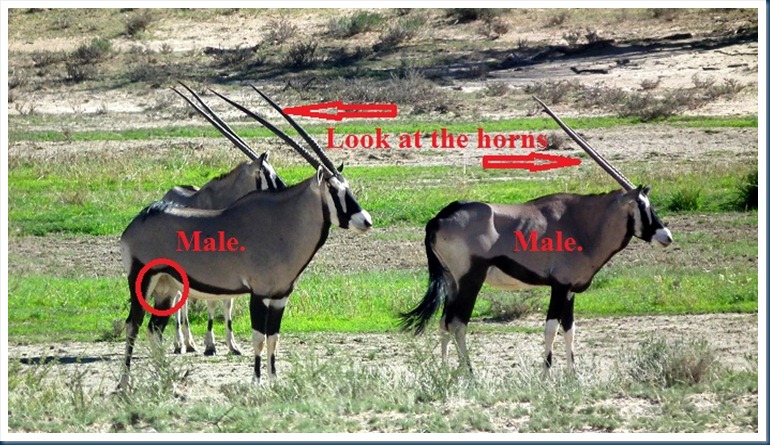 Gemsbok live in herds of about 10-40 animals, which consist of a dominant male, a few non-dominant males, and females. They are mainly desert-dwelling and do not depend on drinking to supply their physiological water needs. They can reach running speeds of up to 60 km/h (37 mph).

In 1969, the New Mexico State Department of Game and Fish decided to introduce gemsbok to the Tularosa Basin in the United States.

Forget those ones…. here are some from the Park named after them.. The Kalahari Gemsbok Park…. 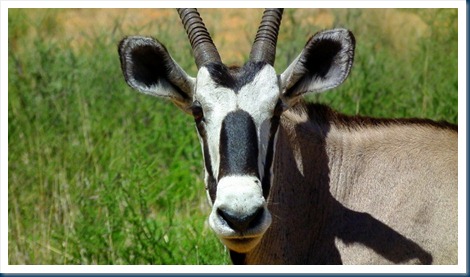 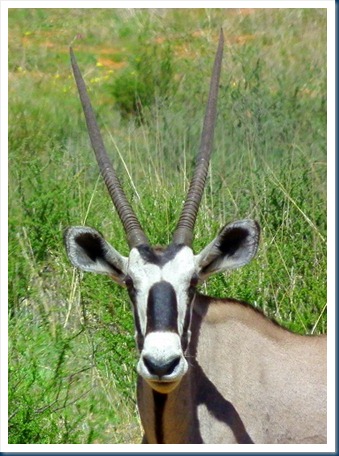 A large antelope with striking black and white markings on the face and legs, black side stripes on the flanks and a long black tail. Bulls measure 1.2m at the shoulders and attain a mass of 240 Kg. Both bulls and cows have horns. The male horns are shorter and stockier than the female horns.

Gemsbok mostly feed on nutritious leaves, grasses and herbs. During the dry season they feed on flowers and will also browse for food. To supplement water requirements gemsbok dig for succulents and extensively eat tsama melons.

The behaviour of this species is geared to energy and water conservation. In the heat of the day they will lie-up in the shades of trees. Where shade is not available they will orientate themselves to present as little as possible of their body surface to the sun. Lone bulls are common and have been known to kill attacking lions by impaling them with their strong horns.

This like the cape buffalo is a tenacious animal… and have been known to attack predators that prey on their young, as demonstrated in this video clip, don’t give up on the clip, the young survives… here’s some photos of them in the Kalahari desert… 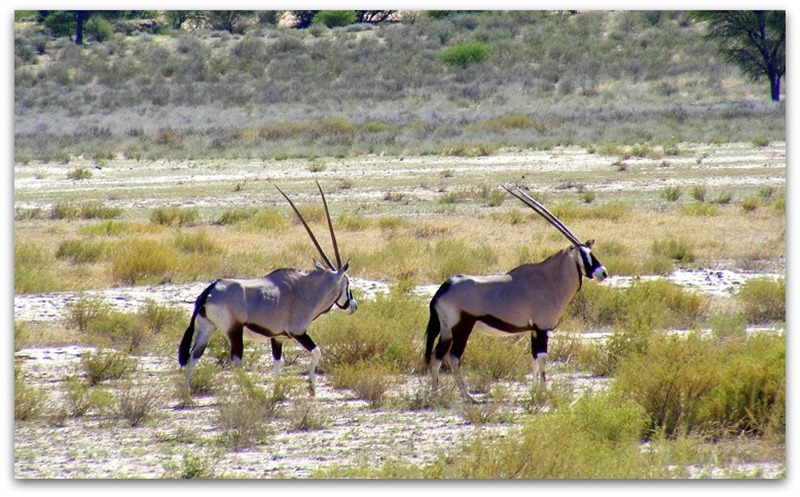 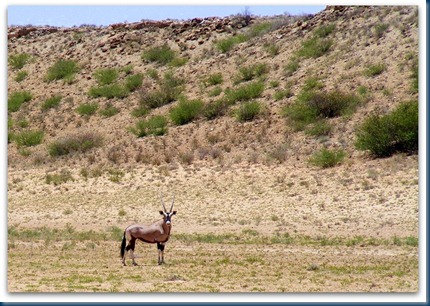 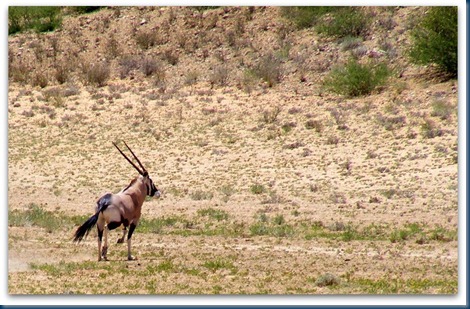