These cheetah we saw in the park.. unfortunately no close ups… but here are a few photos… 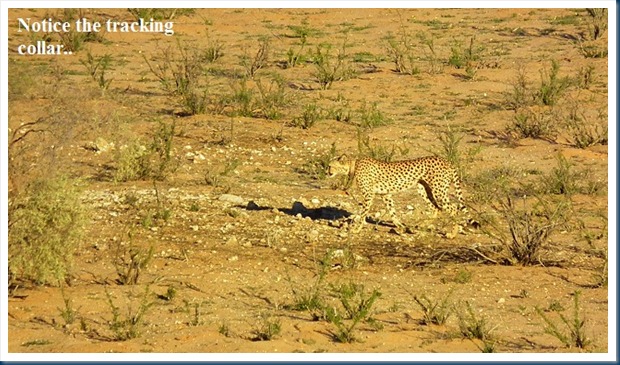 It sometimes referred to as the red meerkat, it is a small mammal averaging about 1 lb. (1/2 kg) in weight and about 20 in (500 mm) in length. A member of the mongoose family, it lives in open country, from semi-desert scrubland to grasslands in South Africa.

The yellow mongoose is carnivorous, consuming mostly arthropods but also other small mammals, lizards, snakes and eggs of all kinds.

These two little fellows paid us a visit at our tent, and entertained us with the antics… Son naturally had to feed them, so we had less to eat…. 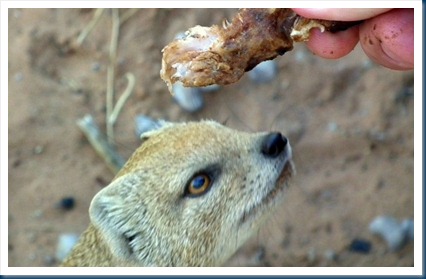 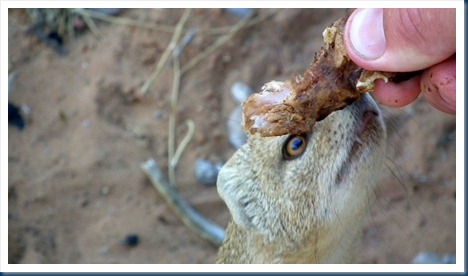 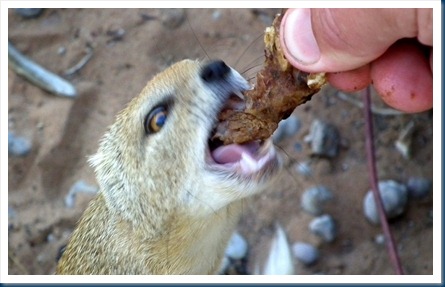 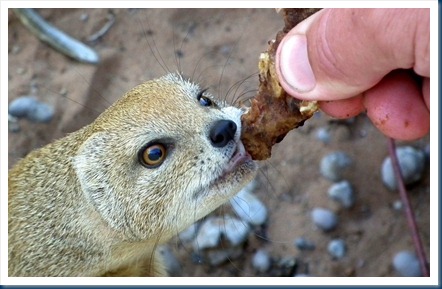 Although this is the most lightly built of jackals, it is the most aggressive, having been observed to singly kill animals many times its own size, and its pack relationships are more quarrelsome.

Black-backed jackals are omnivores, which feed on invertebrates, such as beetles, grasshoppers, crickets, termites, millipedes, spiders and scorpions. They will also feed on mammals, such as rodents, hares and young antelopes. They will feed on carrion, lizards, and snakes.

A pair of black-backed jackals in the Kalahari desert was observed to kill and devour a kori bustard and, on a separate occasion, a black mamba via prolonged harassment of the snake and crushing of the snake’s head. Brave, tenacious little fellows…

Sounds made by black-backed jackals include yelling, yelping, woofing, whining, growling and cackling. When calling to one another, they emit an abrupt yelp followed by a succession of shorter yelps. Jackals of the same family will answer each other’s calls, while ignoring those of strangers. 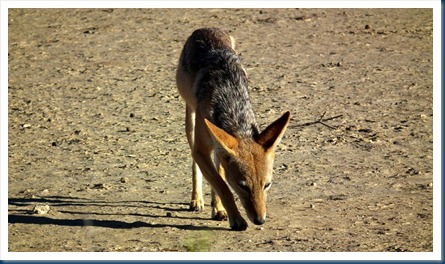 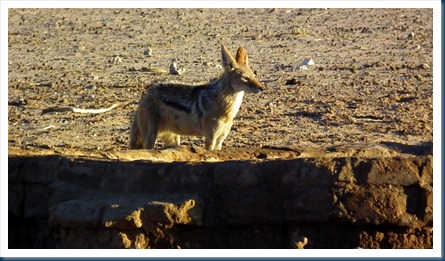 And then for a lucky capture.. this fellow was not keen on getting mud on his paws and having witnessed a Blue wildebeest jumping over the mud he decided to do the same… and I pressed the button at the right time… 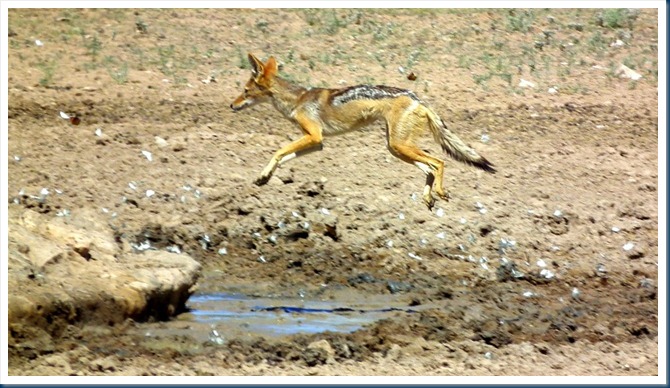 After drinking he left the waterhole via some wood lying next to the hole… he got mud on his feet then… I wonder if he just didn’t want to dirty the water.??

The African wild dog may reproduce at any time of year, although mating peaks between March and June during the second half of the rainy season. Litters can contain 2-19 pups, though 10 is the most common. Weaning takes place at about 10 weeks. After 3 months, the pups leave the den and begin to run with the pack.

Females will disperse from their birth pack at 14–30 months of age and join other packs that lack sexually mature females. Males typically do not leave the pack in which they were born.

In a typical pack, males outnumber females by a factor of two to one, and only the dominant female can usually rear pups. This situation may have evolved to ensure that packs do not over-extend themselves by attempting to rear too many litters at the same time. The species is also unusual in that some members of the pack, including males, may be left to guard the pups while the others, including the mothers, join the hunting group.

The African wild dog hunts in packs and small groups. Like most members of the dog family, it is a running hunter, meaning that it pursues its prey in a long, open chase. Nearly 80% of all wild dog hunts end in a kill; for comparison, the success rate of lions, often viewed as ultimate predators, is only 30%.

After a successful hunt, the hunters will regurgitate meat for those that remained at the den during the hunt including the dominant female, the pups, the sick or injured, the old and infirm, and those who stayed back to guard the pups.

There were once approximately 500,000 African wild dogs in 39 countries, and packs of 100 or more were not uncommon. Now there are only about 3,000-5,500 in fewer than 25 countries. They have been decimated by stock farmers who believe they are vermin. In South Africa very few are found outside of protected areas… 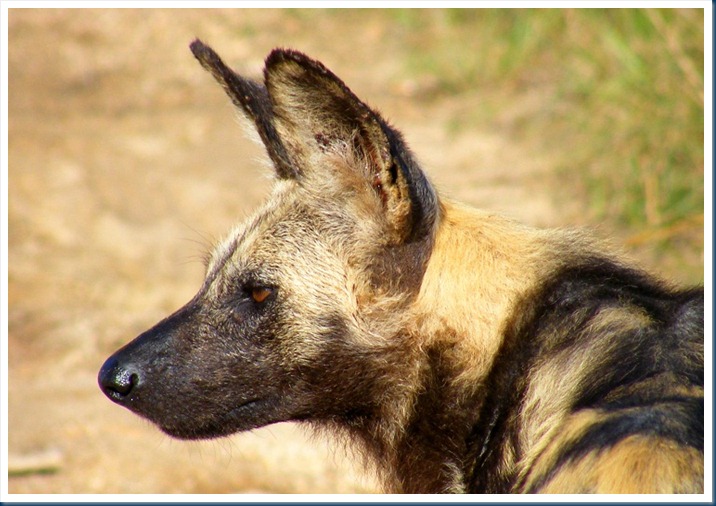 Bitis arietans is a venomous viper species found in savannah and grasslands. It is responsible for causing the most snakebite fatalities in Africa owing to various factors, such as its wide distribution and frequent occurrence in highly populated regions.

The venom has cytotoxic effects and is one of the most toxic of any viper. The venom yield is typically between 100–350 mg, with a maximum of 750 mg. About 100 mg is believed to be enough to kill a healthy adult, with death occurring after 25 hours.

An ugly snake to be avoided in the bush as he will not move away like most snakes, but will strike with deadly force and cause a very sore painful bite.

When I was an learner Land Surveyor, involved in a job at Victoria Falls in Rhodesia I came across one of the biggest Puffies I’d ever seen. Thinking it dead, I poked it with a survey rod and it struck immediately, not being the conservationist I am now, I killed it. That evening we all met at the Peters Motel for drinks, it had the biggest pub in the area (at least 20m long, 60 foot), I took my now dead snake with me, the pub was full of tourists and locals and on entering tossed it on the pub counter. 30 seconds later the pub was empty, the two barmen had exited via the dirty glass opening (smashing 100s of glasses) and I stood laughing my head off…. some how the Manager/Owner was not amused and banned me for life… I took Linda there many years later… he remembered me, but after explaining I’d settle down and was no longer “bush happy” he forgave me… I’m still sure he loaded my bill that day… here’s some photos of one I found the other day… he refused to go into the strike pose which is very strikingly (no pun intended) beautiful….probably too cold… 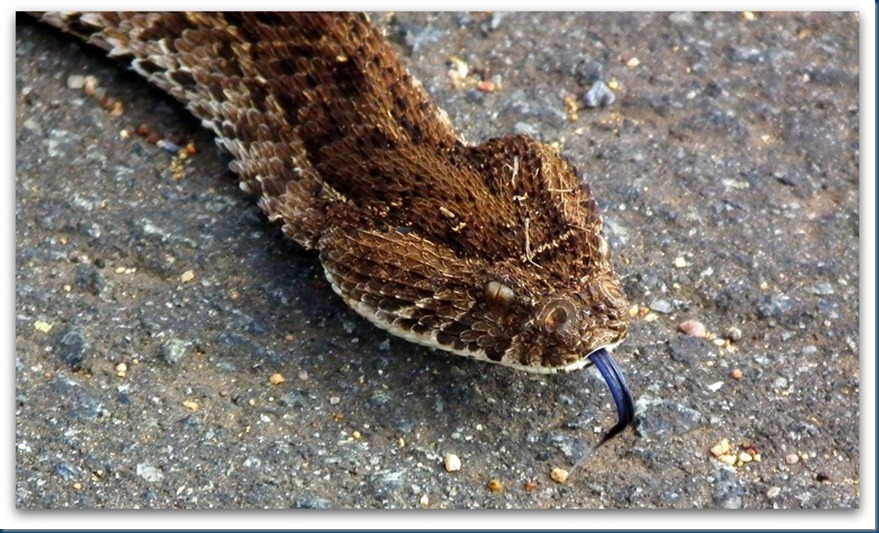