Taking the stats of their sizes I’d say the leopard would be the one of choice…. but knowing their aggression I’d say the lion would have to be the choice….

What would I choose ?? Well to start I don’t want to bumble into either and would do my best not to, but if I had to select one… it would be the lion… the leopard, specially a male, frightens the bejinkers out of me… here’s a photo or two of a male leopard we encountered in KNP a while ago… 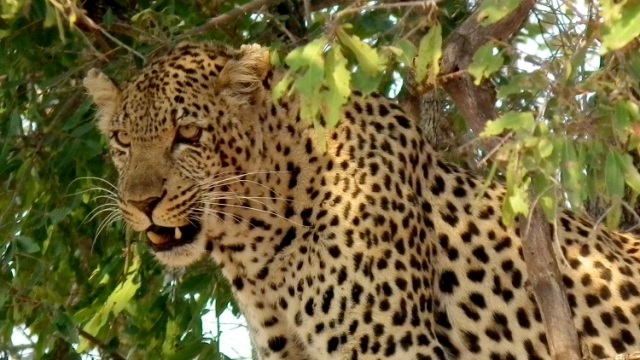 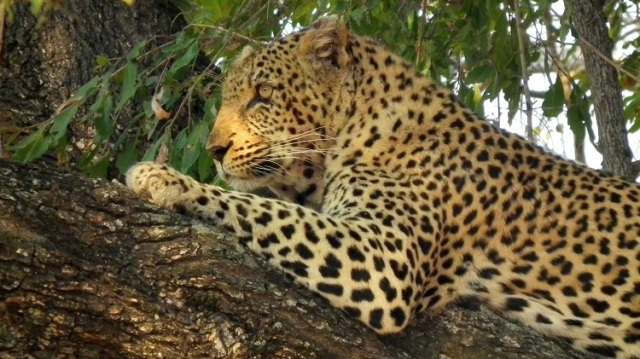 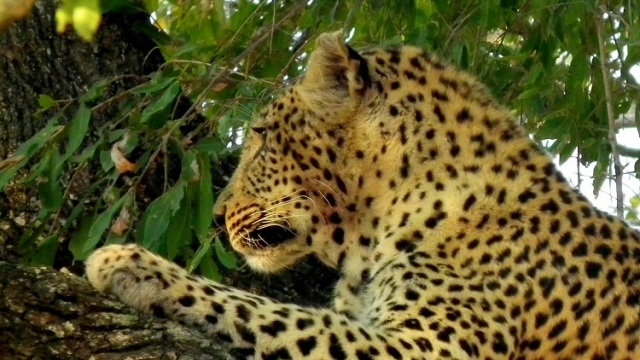 The Namaqua Sandgrouse, also known as the Ganga Namaqua, is a species of ground-dwelling bird in the sandgrouse family. It is found in arid regions of south-western Africa, especially Kalahari Gemsbok Park.

The sandgrouse is a medium-sized bird with a plump body, small head and short legs. It grows to a length of about 28 centimetres (11 in). The male has an orange type buff head, throat and chest and has a conspicuous narrow band of white and dark brown. The colouring of the female and juvenile is more of generally various shades of brown patterned with white specks.

The birds converge on watering holes in the early morning and several dozens or even hundreds of individuals may congregate in one place. They also tend to spend the night in groups, congregating about an hour before dusk. They split up during the day into much smaller groups to feed.

Their principal diet is seeds but they also eat leaves, flowers, small fruit, insects and molluscs. They forage by exploring loose soil with their beaks and flicking it away sideways.

The nest is a scrape in the earth, lined with dried plant material. Incubation lasts about 22 days. The female does the incubation by day and the male does a longer shift at night, starting about two hours before sunset and finishing two hours after dawn. The chicks are able to leave the nest on the day they are hatched. The male brings them water absorbed on the specially adapted feathers of his breast. The chicks grow rapidly; they are fully feathered at three weeks and able to fly at six.

These birds were photographed early morning at a water hole in the Kalahari Gemsbok Park…. 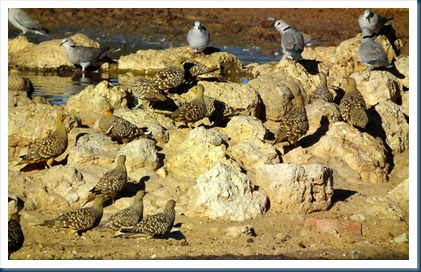 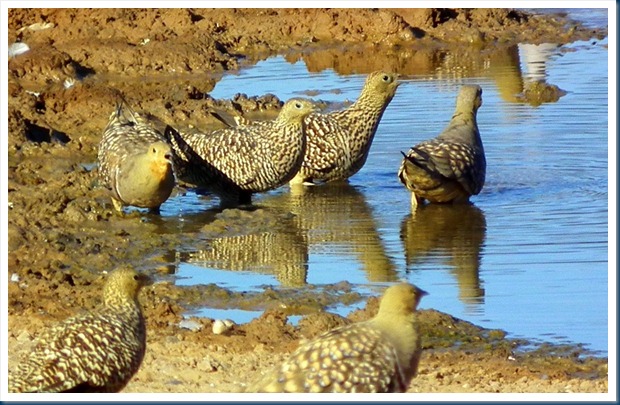 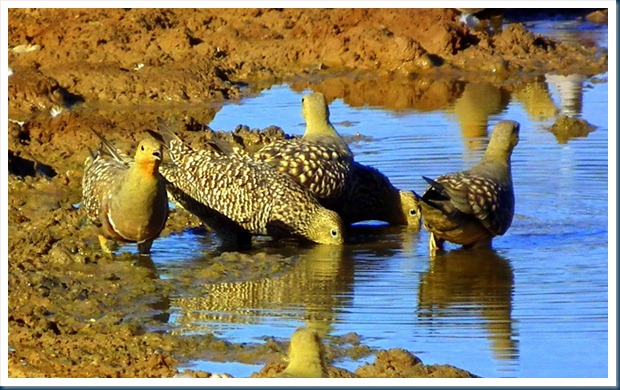 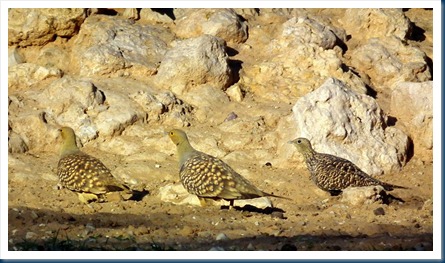 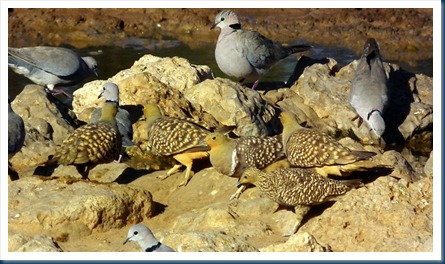 We waited for this vehicle to pass and we moved up next to them to get a few close up photos… My son was on that side of the vehicle and was the closest.. Linda in the back .. she chirped like a chicken calling her chicks.. “close the window, lets move, that lion is going to come through the window.” We took the photos and generally ignored her… 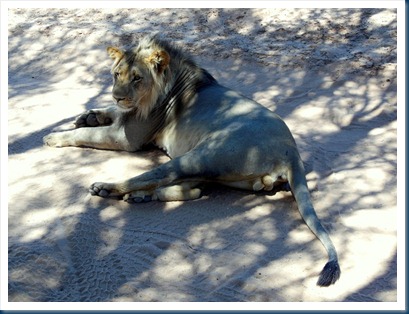 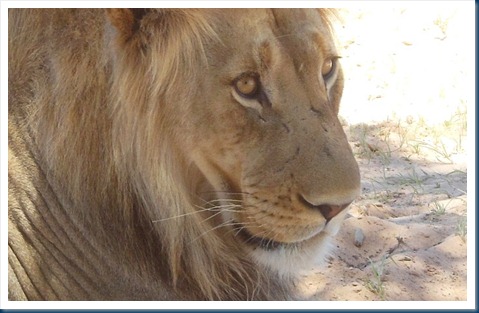 They pretty well ignored us .. and the cameras continued to click.. it’s not that often that such an opportunity arises…. 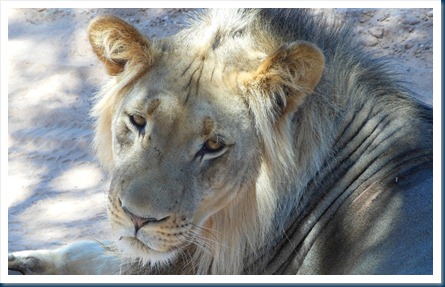 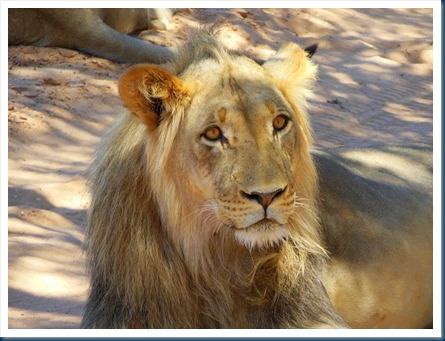 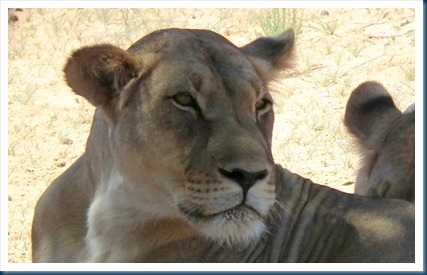 An early morning start took us through the grape lands that just never seemed to stop till just short of the Augrabies National Park.. and then the site to see… 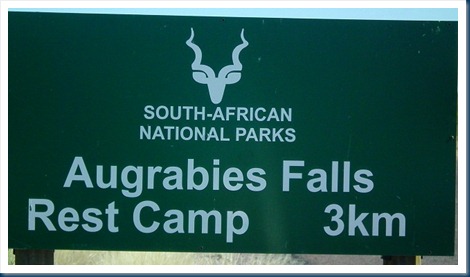 A few details about the Falls….

The Khoi people called it ‘Aukoerebis’, or place of Great Noise, as this powerful flow of water is unleashed from rocky surroundings characterised by the 18km abyss of the Orange River Gorge.

Few sights are as awesome, or a sound as deafening, as water thundering down the 56m Augrabies Waterfall when the Orange River is in full flood.

The Falls: As the Orange River approaches Augrabies Falls it divides itself into numerous channels before cascading down the 56 meter high waterfall. The river then continues its path through an 18 kilometre gorge. The sight and sound of the power of the water will not be easily forgotten. 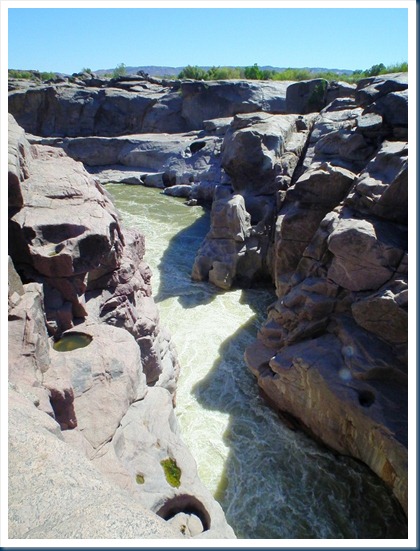 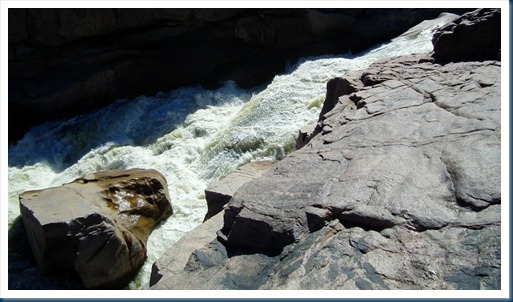 The Orange river is susceptible to flooding and when one looks at the channels it flows through, it is an awesome sight when full as all that water is channelled into a single gorge… below is a snap shot using Google earth showing the falls area…..

The adult’s plumage consists of dark grey-brown coloration on the upper parts, head and upper chest, with slightly lighter edging to these feathers. The body under parts are white with blackish-brown spotting. The under wing coverts are brown, with pale flight feathers being streaked with black. The female is usually larger and more spotted than the male.

Martial Eagles have been thought to have no distinctive display flight, but they do engage in a subtle one, with the males flying mildly around in circles. Rarely, the female joins him and the pair grasp talons with each other.

The Martial Eagle is an apex predator, being at the top of the avian food chain in its environment and, if in healthy condition, having no natural predators. It hunts mostly in flight, circling high above its territory, and stooping sharply to catch its prey by surprise. Prey may be spotted from 3 to 5 kilometres away. The eagles have been noted for their extremely keen eyesight (3.0–3.6 times human acuity). Due to this power, they can spot potential prey from a very great distance. 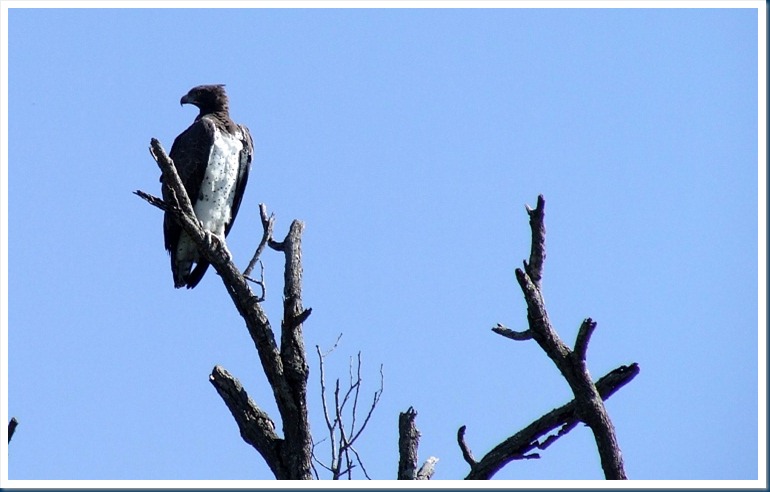 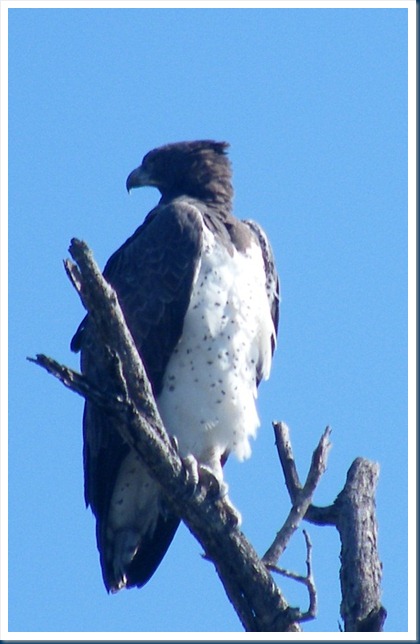